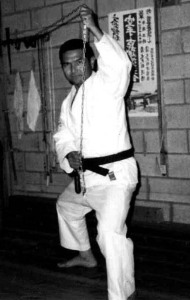 Born 1929 (Showa 4) on the island of Amami Oshima in Kagoshima Prefecture. As a teenager he worked for a railway company in Manchuria (present-day Northeast China). After the defeat of Japan, he returned to Amami which was now under US military occupation. As jobs were scarce he moved to Okinawa in 1952 at the age of 23 where he found work in auto motives.

Until then he had no experience in martial arts. Along with some co-workers, he visited the dojo of Uechi Kanei and became fascinated with Uechi-ryu Karate-do and began training.

While teaching at his dojo in Matsukawa (Shubukan) he became interested in Ryukyu Kobudo and entered the dojo of Taira Shinken where he strived to learn Kobudo. 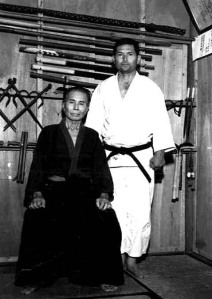